skip to main | skip to sidebar

Three years ago, I wrote a small plugin called "j2og" (for Java To OmniGraffle) which can create OmniGraffle drawings from your existing Java files. At that time, I used AppleScript to create the drawing. Unfortunately this mechanism was a little bit fragile, and somehow it didn't work with new versions of OmniGraffle / Mac OS X. Instead of fixing the AppleScript problem, I rewrote the export.

The new version now directly exports to OmniGraffle files. That means OmniGraffle is no longer needed to export your files to an OmniGraffle drawing. Actually, there are several tools which can open the exported drawings now:

The overall functionality was not changed. E.g., you can export classes and interfaces with or without attributes or operations, attributes can be transformed to associations, context of classes can be exported as well. The screenshot shows a sample drawing exported from the j2og sources. Since j2og does not layout the drawing (I was too lazy to write an layout algorithm), you have to manually layout the diagram. E.g., use the auto-layout of OmniGraffle as I did for the sample screenshot. 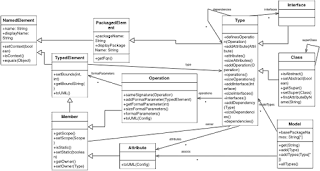 You can either install j2og from the Eclipse marketplace or the update site (see j2og homepage at github for details).

Jens v.P.
I'm a professor of programming methodology at the Hamburg University of Applied Sciences. At Eclipse I am project lead of Eclipse N4JS, a statically typed language based on JavaScript with IDE, and committer of other projects.