skip to main | skip to sidebar

Today I tried to compile a project requiring J2SE-1.4, i.e. with specified in its manifest. On OS X 10.6, JRE 1.4 is no longer installed, instead, version 1.4 points to 1.6. Unfortunately, this JRE is not strictly compatible to J2SE-1.4, as I have learned from this error message: Simply making a selection on the 1.6 JVM in the list compatible JREs in Preferences / Java / Installed JREs / Execution Environment / J2SE-1.4 doesn't help (I tried to clean the projects, but 1.6 is not strictly compatible, thus clean doesn't help here). So, I had to install JDK 1.4, which probably is no problem for Windows and Linux users. However, on OS X, you'll have to follow the hints explained at www.macosxhints.com and repeated here for your convenience:Now, JDK 1.4 is installed on OS X 10.6. We only have to let Eclipse (in my case 3.6RC1) know about it: In Eclipse, select Preferences / Java / Installed JREs / Add Standard VM Enter JRE Home: /System/Library/Frameworks/JavaVM.framework/Versions/1.4.2/Home and JRE Name: JVM 1.4 (or whatever) You will have to close Preferences (OK), and reopen it in order to let the newly added JRE to be added to the list of compatible JREs. In Preferences / Java / Installed JREs / Execution Environments / J2SE-1.4 select JVM 1.4 (now marked with "perfect match") in list of compatible JREs. That's it. Ted Wise provides zipped versions of JVM 1.5 and 1.4, and you may install these versions following his description at http://tedwise.com/2009/09/25/using-java-1-5-and-java-1-4-on-snow-leopard/. In that case, you won't need Pacifist.
10 Kommentare

Yesterday I posted my experiences of getting GEF3D running on e4 0.9. This is only a quick update for e4 1.0 M4. Remy Chi Jian Suen pointed me to e4 1.0 M4, and I followed the instruction on the Wiki page Remy linked to. Unfortunately, I did not succeed installing GMF with e4 1.0 M4 because there were always some unsatisfy dependencies errors. So I wasn't able to reproduce the NPE I described in the blog, and I wasn't able to test the Ecore Tools 3D example. I'm not personally using e4, so at the moment getting GEF3D running on e4 is not my first priority and I didn't investigate any further. Besides, I got a lot of exceptions in the e4 runtime, after restarting the runtime several times it didn't started at all. I get tons of "!MESSAGE unsupported:" messages, and when trying to create a new project with the context menu, the "new"-submenu is missing, finally I get another NPE: I don't know how but after switching the perspective I was able to create at least a simple project, and then the new-submenu was available enabling me to create a GEF3D graph example. So I got GEF3D to run with 1.0 M4 (proofed by screenshot ;-) ), however I found a severe problem with GEF 3.6 and I filed a bug report about that (# 306609). I had to fix that in order to get GEF3D running. Actually, this problem is a GEF3D blocker and I really hope the GEF team can solve that issue. As a matter of fact I'm glad to have found that bug now. I hope it's not too late for the final 3.6 version. 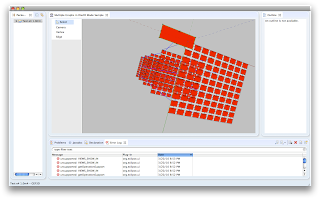 GEF3D on e4 1.0M4! Do you see the level-of-detail effect , i.e. labels on back planes are omitted! (Again kudos to Kristian ;-) )
Boris asked me to file a bug report, but frankly I don't know where to start... I could create a bug report about the NPE I described in my previous post, but I'd assume 0.9 is a little bit out-dated, isn't it?
1 Kommentare

Today I received an email from someone asking whether GEF3D will work with e4. Since GEF3D is "only" an extension of GEF (and GMF), I assumed it will work. In order to be sure, I tried it myself. This is my installation log: Step 1) Downloaded the e4 0.9 release (http://download.eclipse.org/e4/downloads/drops/R-0.9-200907291930/index.html#EclipseE4), in my case the Mac OS X Cocoa version Step 2) Installed the following features via the given update sites: Step 3) Imported GEF3D team project set found at http://eclipse.org/gef3d/resources/GEF3D.psf State: The 3D graph example is working, see screenshot. 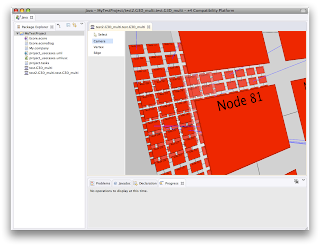 GEF3D on e4! (Note the nice vector based fonts :-D Kudos to Kristian!)
Step 4) Now installed the missing features in order to test all examples: Restarted e4 after downloading these bundles. Ups, what's that? My toolbar has gone...? Where is it? However, I doubt GEF3D or GMF to be involved in that bug... Hmm... was there a toolbar before step 4)? Weird. UML2 Tools and Ecore Tools are working, at least the 2D versions. Unfortunately, the 3D versions are not working. There are not much error messages: I didn't analyzed that error... without a toolbar, it's not very comfortable. Besides, I didn't found the code of LegacyPartRenderer and I didn't find a way to declare an exception breakpoint. Summary: Since the 3D graph example is working, I assume GEF3D and e4 should work in general (e4 does change the workbench, but not SWT or GEF). However, the 3D-fied UML2 and Ecore editors are not working, but I have no idea why they don't. Maybe it's not e4 but a problem with the latest GMF or ecore tools versions, I don't know. Frankly, I have ignored e4 for the time being (simply because I haven't had the time). IMHO you cannot simply install existing 3.x plugins and expect them to work with a 0.9 incubator framework. In so far I'm happy about the 3D graph example running! Besides, I assume my test only tested the legacy layer of e4, and not e4 itself. However, I'm still wondering why the 2D version of the ecore diagram editor is working and why the 3D version isn't. I'd assume there exist documents in the e4 project about how to solve problems like this.
7 Kommentare

A friend of mine asked me how to modelling with Eclipse. I gave him a quick tour, demonstrating how to create a model with EMF, how to create an instance of that model, how to query the model with OCL, and how to create a text editor for that model with Xtext. It's pure modelling, i.e. no Java programming at all! I thought that maybe other people would be interested in that topic as well, so I created this little tutorial showing how all these Eclipse modelling "ingredients" can work together.

Install Eclipse 3.5 (Galileo) with all the modelling tools, that is the Galileo Eclipse Modeling Tools package. Additionally, we will need the OCL interpreter console, which can be installed using the MDT update site:
http://download.eclipse.org/modeling/mdt/updates/releases/
The OCL console actually is an example, so you will have to install that specific example.

Let's assume a small IT company. The employees of that company develop software for other companies. Of course, they use models for that purpose! In order to better organize their work, they want to document who is working on what. That is, they want to assign certain task to developers. A task could be the implementation of a use case or writing a test case for a class. Let's see if we can use models for that...

First of all, we have to create a model describing the company. Let's start from scratch: Now, we can "draw" our model using the graphical editor. Create four classes (EClass), add a name attribute (EAttribute) to one of them, create references (EReference) between the classes, and set the properties (in the properties view, this view can be activated by right-clicking in the diagram and select Show Properties View. The result should look like Figure 1. 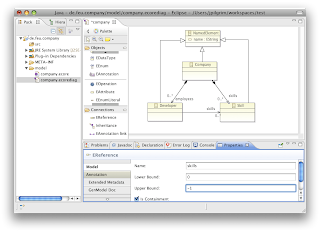 Now that we have a model of our company, we want to assign tasks to the employees. We could create a new ecore model just as demonstrated above, but we want to try something new. So, let's try to not only create a model, but a text editor as well. For that, we will use Xtext. Based on a grammar, Xtext can create an ecore model and a text editor with nice features. The grammar is an annotated EBNF grammar, I do not want to go into the details here (otherwise it wouldn't be a q'n d-tutorial ;-) ). So, we have to create a new project and enter a grammar: Notes: Although we haven't written a single line of Java code yet, a lot of code has been generated automatically. In order to "activate" that code, which actually defines a new Eclispe plugin, we have to start a new runtime instance of Eclipse, that is we start Eclipse from within Eclipse. In the long run, you will have to get used to Eclipse plugin development anyway... As we have to run a new instance anyway, we can generate an editor for our company model as well. Instead of using a dynamically created instance using the "Generic EMF Form Editor", EMF can generate a Java implementation of the model and an editor as well. We will do that now:

Now that we have generate a lot of code, we want to use the newly created tools. Start a new Eclipse runtime instance (e.g. by selecting Run As / Eclipse Application from a project context menu) and do the following:

IMHO it is impressing what you can do with all these cool Eclipse modelling tools, without writing a single line of (Java) code. We saw how to We didn't bothered about how to store our models or model intances (it's all XMI), we were using OMG standards like UML (the EMF based implementation is provided by the UML2 project, EMF's ecore is an EMOF-like model, we were using OCL, other implementations are available, too (e.g., BPMN2, SBVR, or SPEM used by EPF). And if you do not find an Eclipse project, you probably will find a third party project providing an EMF based implementation ;-) With tools like GEF or GMF you can create (or generate) diagram editors for your models, and (well, I couldn't resist) with GEF3D you can even create 3D diagram editors, e.g. for visualizing inter-model connections. And there are many more tools out there, partially for simplifying the use of existing tools, for model transformations and code generation and so on. And of course you can adapt and modify the code generated above to suit your need.

While it is very easy to do impressive things (with the help of a tutorial), it is very hard to get into all these frameworks and tools. There are a lot of traps hidden everywhere! Just two examples from the tutorial: Well, I probably should file a bug report at least for the first problem... So be warned: Even if the tutorial gives you the impression as if modelling with Eclipse tools is very easy, it sometimes isn't. In general, modifying generated code as well as using tools like GMF is not that simple. But at least there are the newgroups, tutorials, and even books (e.g. the EMF book (2nd edition!) or the GMF book).

This is a quick and dirty tutorial article. I simply documented an example modelling session by taking some screenshots, and then wrote some explanations. So, there probably are some things I've missed to tell you or errors in my text. Please leave me a comment if you find a bug here ;-) (or if you like the tutorial). May the Model be with you!
8 Kommentare

Jens v.P.
I'm a professor of programming methodology at the Hamburg University of Applied Sciences. At Eclipse I am project lead of Eclipse N4JS, a statically typed language based on JavaScript with IDE, and committer of other projects.